Since Halloween is Monday, I thought I would share with you some of my Halloween dolls.

Below: a tiny bear dressed as a ghost, hiding in a pumpkin and a vampire smiley-face doll. 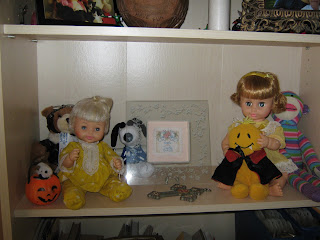 A nifty retro black cat doll I picked up a couple of years ago at Joannes or Michaels. 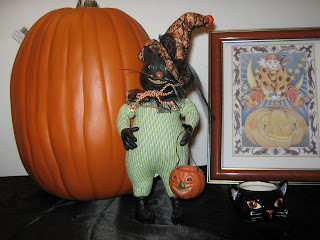 Dracula by Universal Studios. A friend gave him to me in high school, based on her knowledge of my fascination with vampires. 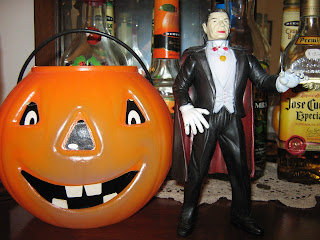 I hope you have a fun and enjoyable Halloween.

Posted by aprilperlowski at 9:49 AM No comments:

Look what arrived in the mail 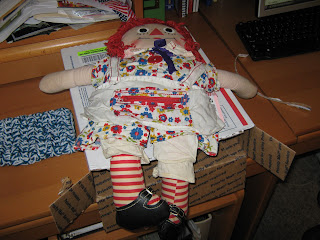 When I saw this Raggedy Ann Dress Me Doll on Ebay, I knew that I had to buy her for my Christmas present to myself. This is the same doll that I had as a child, until one day I found her to be gone when I came home from school. My mom had decided to get rid of her and another doll (an orange clown) because of their state of disrepair. 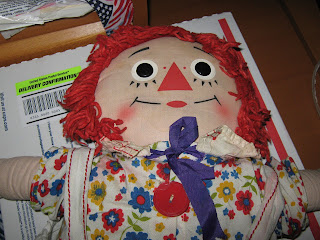 This was rather traumatic. Raggedy Ann was my favorite doll. I slept with her every night. My room was decorated in Raggedy Ann everything. 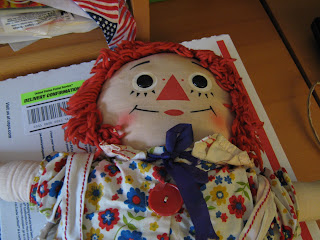 And now, I have her again (in better shape than my original was when I lost her.) 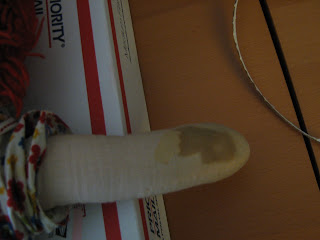 Now I get to start cleaning her up. Hopefully I can figure out how to get rid of the nasty stain on her hand. Hopefully I will post photos of her looking a lot better soon.

Posted by aprilperlowski at 11:05 AM No comments:

Before I received Malibu Barbie and Ken for my 4th birthday, I had a non-Barbie 11 1/2 inch fashion doll. I had named her Melissa.

As you can see, I loved and played with her until she fell apart. Her left arm disappeared in the late 70s, but I couldn't bear to part with her.

At one point she even had eyelashes. I can remember running my fingers over them. Those too are long gone. 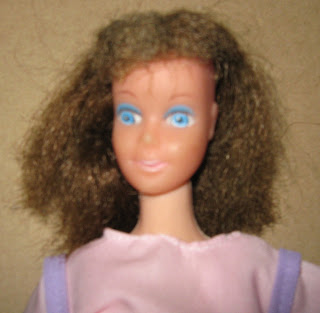 The most interesting thing about her, in my opinion, is that her arms are of a soft vinyl/rubber material, while her body is hard, hollow plastic/vinyl and her legs do not bend.

In my doll play, she usually was the teenage daughter of Barbie and dated the Luke Skywalker doll. (Barbie was married to my Shaun Cassidy doll since Ken was no longer around due to a brother induced accidental beheading.)

Posted by aprilperlowski at 10:00 AM No comments:

Yesterdays Miss Carroll's Doll Study Club meeting was about doll house dolls. I spent the evening learning about the history of doll house dolls and admiring the examples that were on display.

So, in honor of the meeting, I present my doll house dolls. 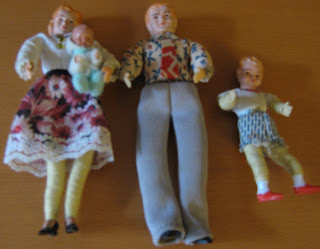 Once upon a time there was a girl doll, but I finally threw her away when her head refused to stay on. (I know, I know, a hasty and unwise decision.) They were made by the German company Caco and I received them around 1978. Since they were a family of five, just like mine, I decided they were my family. It made naming the figures very easy.

On Christmas Eve, my younger brother, Billy, and I, slept in our sleeping bags under the Christmas tree. Billy was determined to see Santa. I was hoping that we would fall asleep so that Santa would actually come. At one point I heard noise and saw a shadow in the stairwell to the basement. I panicked, closed my eyes and pretended to be asleep. I guess I eventually fell asleep. In the morning, not only did I get to tell everyone that I saw Santa's shadow, but I also got a doll house. 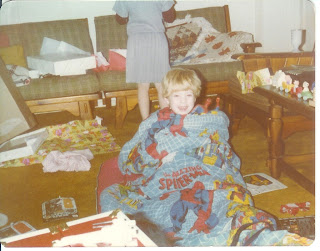 Here he is in his Spider-Man sleeping bag, holding his new Automated Spider-Man and surrounded by Star Wars figure packets.

Posted by aprilperlowski at 11:58 AM No comments:

In 1974, I went to the circus with my father, my brother, and his Indian guides tribe. It was amazing. To a 3 year old child, the circus is full of wonder and magic. My dad let me pick out a souvenir and I picked out this clown. 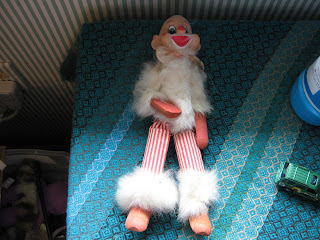 He was attached by a rubber band to a dowel, so that he bounced up and down when the stick was carried. His has jointed arms and legs that sway back and forth. The stick and elastic are long gone, but the clown itself is in great shape. 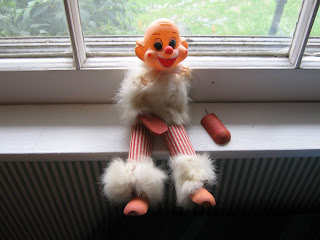 His right hand is no longer firmly attached to its arm, though a little hot glue or putty in the arm would take care of that.

As I grew older, I started to collect clowns and clown dolls. At one point in my teens I even had clown bedding! At this point, except for a few favorites, I no longer collect clowns. I have found my doll interest turning to dolls from the 60s and 70s, especially ones that I can dress.
Posted by aprilperlowski at 10:50 AM No comments: