On Monday, July 19th, I got up bright and early and headed down to the 4th floor convention area, where I would be working at the Mini-Office. While waiting at the elevator, what did I see? 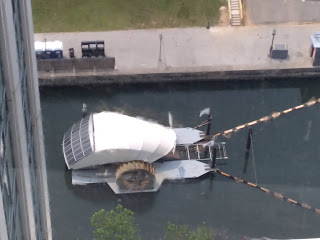 Could it be? Yes, Mr. Trash Wheel was hanging out just outside the hotel! How awesome was that. I probably, definitely, squealed in joy when I saw him. I then immediately took a photo and posted it to Facebook so my husband, also a Mr. Trash Wheel fan, could see.
Merry, had changed tops for the day and was dressed up in her new crocheted summer sweater, so she could help out at the Mini-Office. 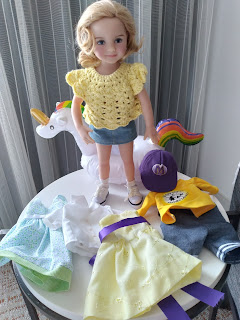 From 9AM-12PM at the Mini-Office, we helped con attendees with directions, replaced missing membership cards, sold tickets to paid events, and supplied volunteers with their convention volunteer charms/tie tacks. Then, my shift over, Merry and headed down to the hotel restaurant to get some lunch. I ran into some friends down there, so we sat together to eat and I learned some really cool info about paper dolls and the 2022 Paper Doll Convention that will be in Wisconsin (shameless plug for the friends who are hosting it.)
After lunch I gathered up my competition dolls and headed to the 3rd floor competition room. I brought 3 dolls this year: an Asian BJD, a non-Asian BJD, and a male celebrity doll. The competition clerk had me quickly checked in and I put my dolls on the appropriate tables. And WOOSH! That was done. 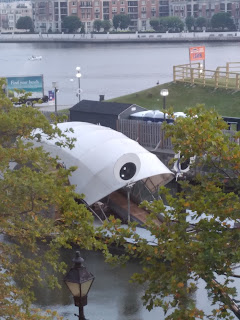 The rest of the afternoon was filled up with attending the AV Contest Winner program (a great program this year, on 20th century fashion through the decades on modern fashion dolls), checking out the UFDC Boutique, snapping a better photo of Mr. Trash Wheel, socializing, and having dinner in the hotel restaurant.
That evening were the Opening Ceremonies and the Grand Opening of the Sales Room. I took a quick walk thru of the Sales Room, but, as always, it was way too crowded for me to see much. I wish I had looked at one particular booth more closely, but, oh well.
To be continued in Part 3.

Posted by aprilperlowski at 10:22 AM