Those who have followed my convention coverage know that I really enjoy volunteering for the Helper drawing. So I was up early and headed down to the Helper Room at 6:30AM. We quickly moved the Helper buckets to the main ballroom site and proceeded to set them up for the drawing. This involves lining them up on tables, stacked 2 deep, and removing the lids and labels and putting them in the buckets.There were about 400 buckets to to do this to this year, so we worked quickly and efficiently, to be done before 9AM.

While some of us were working on the buckets, other volunteers were setting up the tables where attendees could match up their tickets and pick up their notice that they won an item. A couple volunteers were ready to type the winners in a database.

And we were ready. I was at the spot labeled N-Q - where I would line up the winning tags alphabetically so that attendees could match their tickets up quickly. The winners were called quickly and by the end of the drawings, I had one 3 items! 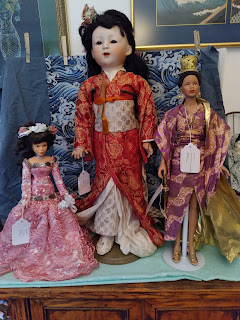 Merlot, a doll by Rustie. I think she has an interesting look. 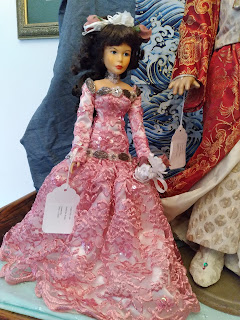 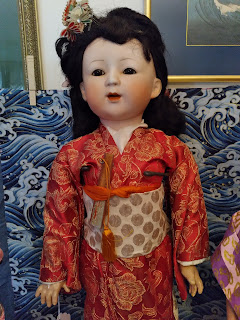 And a Tonner Fashion Model - Olivia. 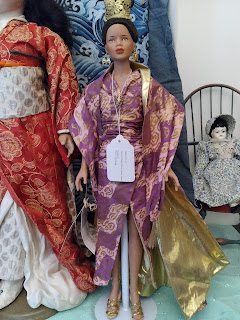 There were a lot of happy convention goers when all the tickets were drawn.
The rest of the early part of the day was spent taking a last peek at the salesroom and the UFDC Boutique. While in the Boutique, I noticed that they had some of the lunch and dinner event souvenir dolls in stock. 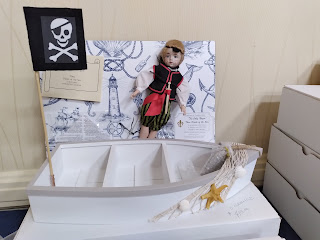 Yo Ho Ho Maties by Jennie Sykes and Sophie Pearson 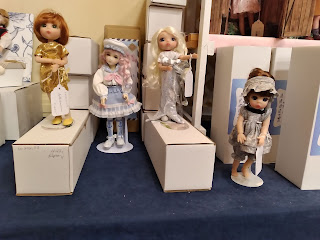 Under the Sea by Judy Porter (the doll in gold and the silver mermaid), Love on the High Seas by Ruby Red Galleria, Chesapeake Bay Cuties by Pat Moulton. 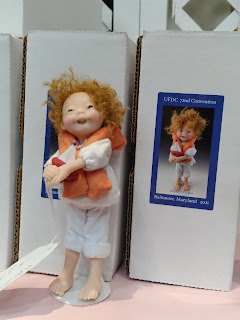 And Seaworthy Suits by Elizabeth Cooper. 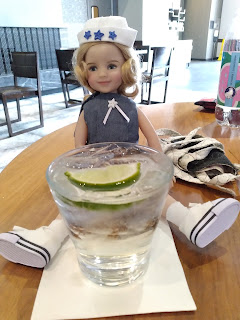 My room mate and I then spent about an hour relaxing in the bar, before heading to the Ballroom area. We found some comfy, plush chairs and waited for people to arrive for the cocktail hour. And arrive they did! I was even social, LOL. I probably talked for close to an hour about K Dramas (and other Asian shows) with another Dollology club member.
When the doors opened, we all made our ways to our assigned tables. They were decorated with light house centerpieces. 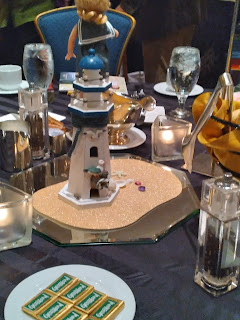 Those who brought table favors, passed them around. I passed out some of the sweaters I had made all Spring.

Gifts from other tablemates included and rubber teddy bear, 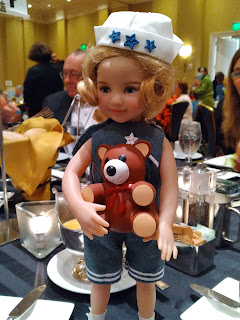 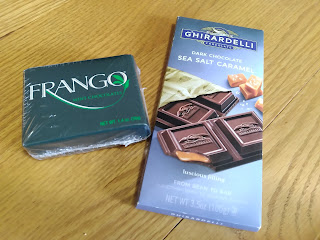 And Paper Dolls. (Shown in the photo below with other items I received during the week.) 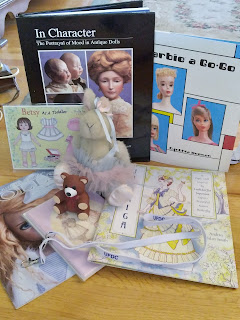 Dinner was steak and a crab cake, and a slide show of the week was shared on the large screens. 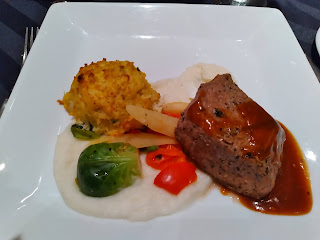 At the end of the banquet, attendees who had purchased the optional convention doll by R. John Wright, opened them up. She is adorable, and even holds her own little doll. 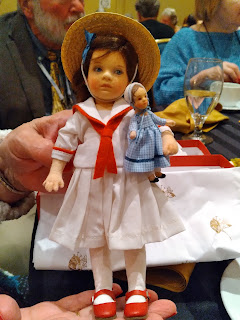 And that was that, the banquet was over, the convention was officially over, and it was time to leave.
My take-aways from this year's convention: I was surprised at how few attendees were consistently masked up - probably less than 10%; those attending were so happy to be doing something "normal" that they missed out on last year; and I really missed the people that I did not see this year that have usually been at convention.
I hope that the pandemic is a thing of the past next year.

Posted by aprilperlowski at 9:45 AM