My poor, poor, Malibu Barbie. She has seen better days.

Here she is, wearing part of her purple suit (probably not Mattel). It originally had a white button down shirt with a dark red tie, but it finally died ten years ago, or so. She would wear white Barbie boots with it. 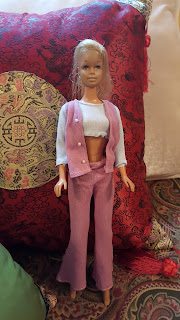 Malibu Barbie was introduced in 1971. I received her (with Ken) for my fourth birthday.
The first thing I did with her was lay her on the window ledge to tan, since that was what she did. Not long after, I removed her bathing suit and had her tan all-over, since I did not like the bathing suit lines. 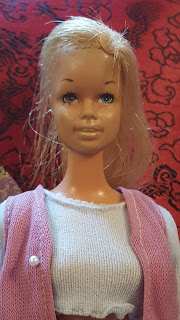 I used and abused poor Barbie. She went to the pool, the bath, and the beach with me. After all, she was in a swim suit, she was meant to swim. And swim she did. She was still accompanying me to pools when I was 12. All that swimming, caused havoc with her hair, since I combed it straight again after each dip. She now is almost bald, and her facial discoloring is probably some what caused by the chlorine in the pools. 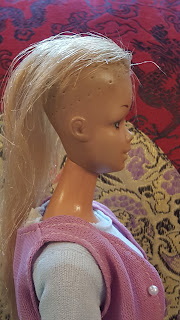 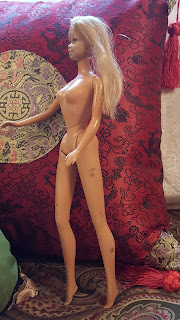 Her legs still click in 4 positions, yay! But she has some mystery marks on her legs and at least one spot where I can see under her top layer of skin.H 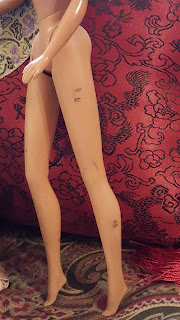 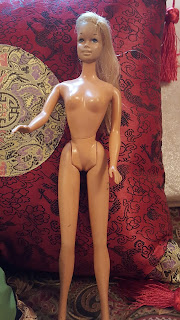 And yes, her feet have chew marks. I'm going to blame my younger brother. And maybe the cat. I would never nibble on her delicate toes. Even if they felt neat rubbing over my gums. 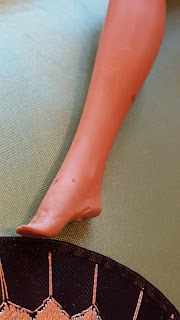 What do I do with her? Do I get her re-rooted and redress her? Or do I buy a good condition Malibu Barbie and display then together?

Posted by aprilperlowski at 11:04 AM