It feels like forever since I posted here, instead of just over a Month.

But I have a good excuse, really. I was working on creating a Halloween costume based on the one in the picture below. 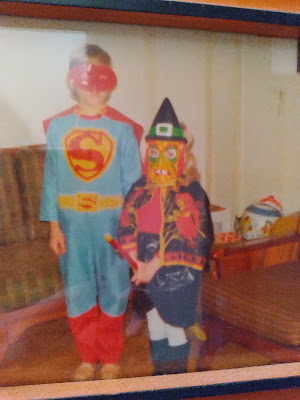 I was probably 5 years old in this photo. The costume was by Collageville. Remember them? The costume consisted of: a thin, plastic material, black skirt; a cape of the same material with witch designs printed on it; and a plastic witch mask.
Collegeville costumes were notorious for the plastic material of the costumes ripping really easily, so you could only get 1 or 2 wears out of them.
With the costume, since it is cold in October in Northern Illinois, I had on a red turtleneck, thick white tights, and black rubber rain boots. I also carried my little broom, that I already had. 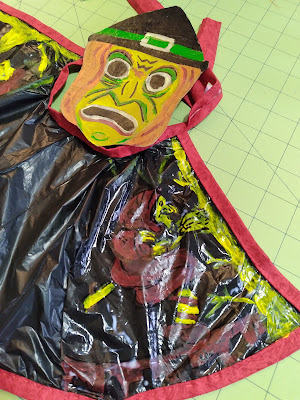 To make the skirt and cape, I used black trash bags. Turns out, that trash bags are not the easiest to sew or paint, but with lots of hard work, I figured out the best methods and got it done. Not bad, huh? The mask is just painted cardboard. The shirt is red flannel. All the patterns are modified from Fisher Price My Friend Mandy sewing patterns. 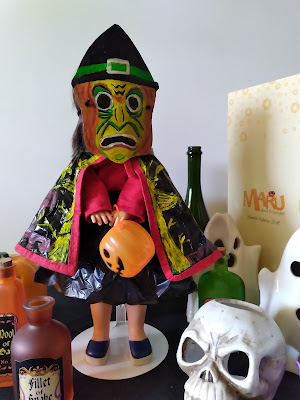 And who is behind the mask? My Friend Jenny. I found this Jenny at a thrift store about two years ago, and was waiting on an awesome outfit to dress her in. Now she has one. 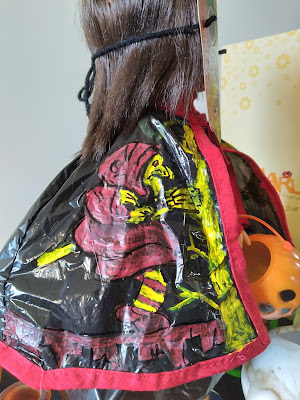 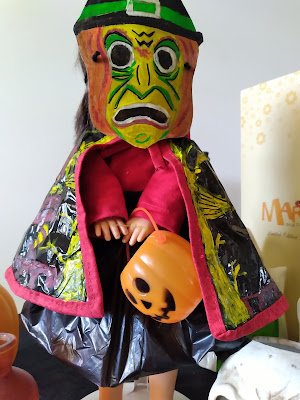 Jenny is already to go Trick or Treating tonight.

Posted by aprilperlowski at 12:03 PM