I have always been a doll owner and lover. Here is a picture of me with my dolls on my first Christmas. I haven't identified the doll on the left yet, but the doll on the right, hiding behind the Fisher Price chime ball, is a 12 inch Horsman Lullaby Baby. I carried her around throughout my toddler years until she lost her pull string and she started going bald. I was also fascinated by the holes on her torso to let the sound out, it looked so foreign. (bodies should not be full of holes.) 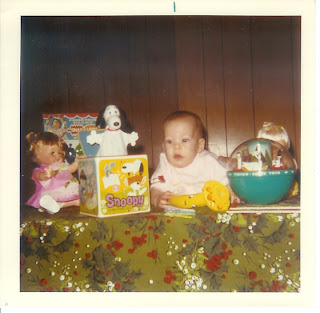 I eventually sold her and my Eegee Softina in a yard sale when I was a teenager. Who knew that 20+ years later I would come upon and buy a working, good as new version of her? She is even wearing the original pajamas. 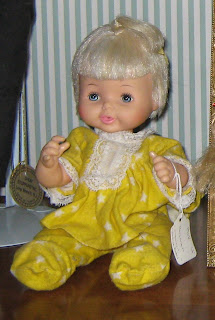 She is marked 1968, though I have seen the same model marked as 1964, and I received it in 1971. Wasn't it nice when the same doll was sold in stores for years? Nowadays, if you don't buy a doll when it first comes out, it is soon out of production and off the shelves.

Posted by aprilperlowski at 4:56 PM