This week I was inspired to set up a display of dolls dressed as old-fashioned girls. They are dressed in the fashions of the late 19th century and early 20th century. 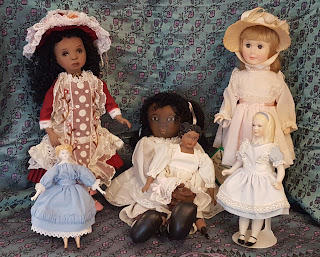 The beautiful Simon and Halbig doll I posted about previously was the inspiration.

While she is dressed in the fashion of the time she was created, the dolls in my display are all modern dolls designed to recreate the look and feel of those bygone eras. 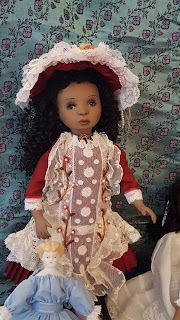 This first doll, dressed in red and lace, is Adelaide's Friends by Goldie Wilson from 2016. Like the Simon and Halbig doll, she is in a drop waist dress and hat. This little doll in blue is Caroline by Rosemarie Snyder. She was the souvenir from Miss Carroll's Doll Study Club luncheon, "Stitches in Time" in 2014. She was made to resemble a lady doll of the 19th century. Underneath her blue dress, she has white undergarments and a blue corset. 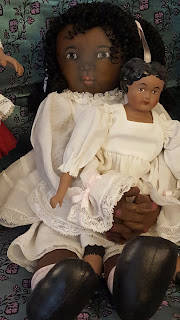 This little cloth girl and her porcelain doll, both by Goldie Wilson from 2016, are dressed in white short dresses and matching long pantaloons and black shoes. 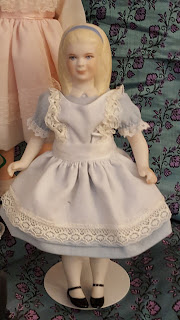 This little Alice in Wonderland is a beautiful reproduction by UFDC member and doll artist (deceased) Phyllis Juhlin Park, 1981. I have been told she might have been a regional conference souvenir. 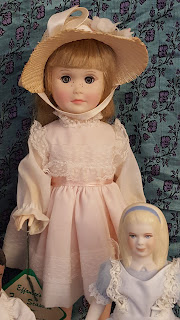 While the other dolls were handmade artist dolls, this sweet 14", vinyl doll was mass produced. She is Four Seasons: Summer by Effanbee, from 1981. Her dress, like the Goldie Wilson doll in white, has the dress brought in at the natural waistline and a high hemline. The Alice doll also wears her dress like this.

Clothing fashion comes and goes, and it is interesting to see it reflected in one's dolls.

Posted by aprilperlowski at 11:48 AM