Thanksgiving is this week. And while I don't decorate much for Thanksgiving, some of the dolls decided they wanted to pose with the cornucopia. 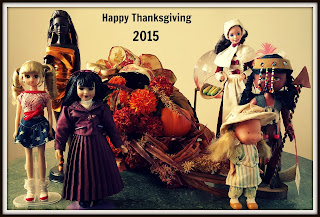 Together they represent the 1970s to today, with a Pilgrim, a Native American, a prairie girl, an Asian American, a newcomer to the U.S. (Licca), and a modern African American.

They are all thankful to be part of my collection, and I am thankful for them.

Posted by aprilperlowski at 10:51 AM