I figure it is only fair that I review Disney World, since I spent many blog posts talking about Tokyo Disney.

Last week we went to Disney World in Florida. This was my husbands first time at the U.S. theme park, so I got to play tour guide.

Our first day was spent at the Magic Kingdom. Since he had been to Tokyo Disneyland with me, we felt free to skip most of the rides he had already been on, and focus on things that he hadn't experienced before. 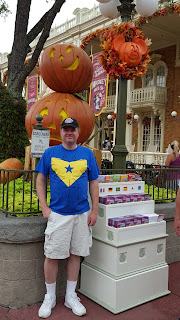 The Halloween decorations were up in the Main Street area.

Our first Fastpass was for Under the Sea: The Journey of the Little Mermaid. Note to self, in off-season, we didn't really need a Fastpass for a ride that early in the morning. There was no wait. The ride was OK, but I think the dark-track ride model has gotten stale. 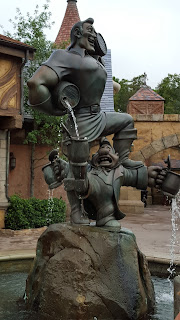 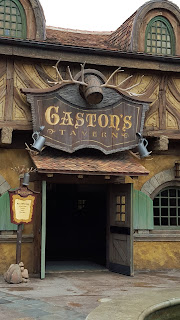 And tried to get lunch reservations at the Be Our Guest restaurant, but no luck. I wasn't surprised, I'd tried to book a month ago with no success.

We got into the relatively short line for The Many Adventures of Winnie the Pooh. The interactive queue was a nice change. The ride had some of the same animatronics as the Tokyo Disney ride, but none of the excitement and wonder. It was slow paced and not a worthy replacement of Mr. Toad's Wild Ride.

Since the Mad Tea Party was next door, we hopped into a teacup and spun around and around. Again, no wait. 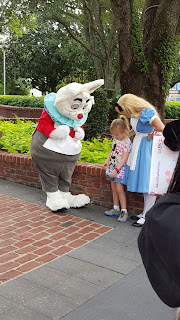 There was a wait to see Alice and the White Rabbit, but the line was already shut down. Poop. This was the best photo I could get of them.

We headed over to Tomorrowland and enjoyed Buzz Lightyear's Space Ranger Spin. The guns were easier to use than in Tokyo, and we even scored some points. Dave beat me, of course. 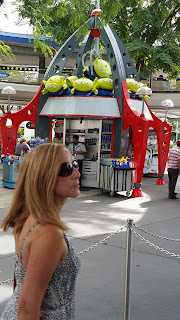 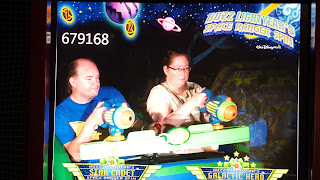 We also took a leisurely ride on the Tomorrow land Transit Authority People Mover. It was a nice break from the sun and the growing crowds. 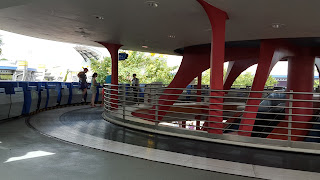 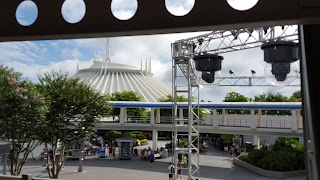 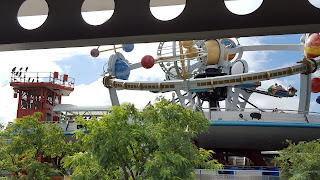 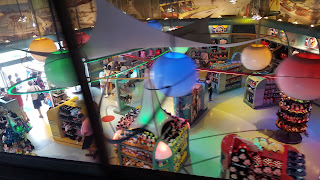 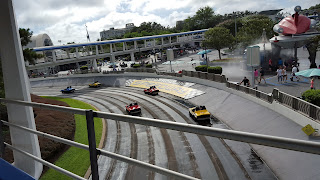 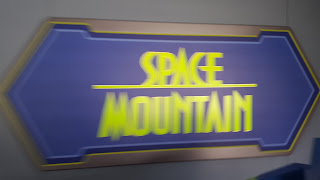 Our last ride (with Fastpass) before lunch was the Haunted Mansion. Yay! By this point we were getting tired and cranky and tried to find an indoor restaurant to eat at. Yeah... good luck. We ended eating Chili dogs at Casey's and feeling sorry for ourselves. We should have goon back to fantasy land and eaten at Gaston's, or any of the counter service restaurants back there, away from the crowds. Lesson learned. 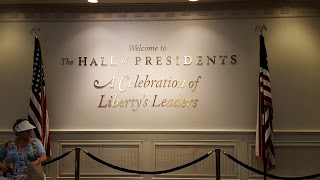 After lunch, a standing lunch at that, all we wanted to do was sit down and relax, so we headed to my favorite rest spot, the Hall of Presidents. It was a decent show, but I think the presidents had less little movements than the last time I saw the show. The President Obama animatronic was impressive. 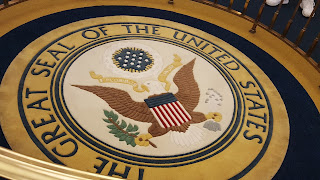 We then made our way to the Jungle Cruise (Fastpass). Our boat guide was quite the ham. 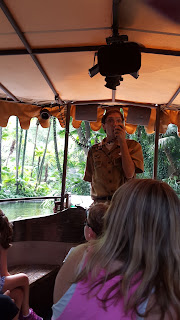 I'm all for nostalgia, but the low tech animatronics on this ride seemed stale to me. I still enjoy them, but part of me wants something new. And this has always been one of my favorite attractions. 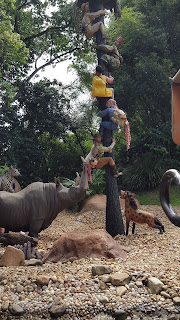 We then waited in the awful heat, in the standby line for Splash Mountain. Grrrr. At this point in the day, 1:30ish, the line was awful. But, the ride was fun. Dave was weary of getting soaked, so he wore his poncho. He was surprised when we only got a few drops on us. It was only my second time on the ride, and I really enjoyed it, even after standing in line that long.

We walked past Jesse and Woody, but didn't wait in line for photos because our hotel bed was beckoning us to a well deserved afternoon nap. 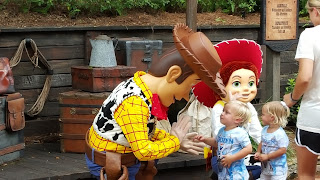 Posted by aprilperlowski at 7:49 AM

Email ThisBlogThis!Share to TwitterShare to FacebookShare to Pinterest
Labels: Disney